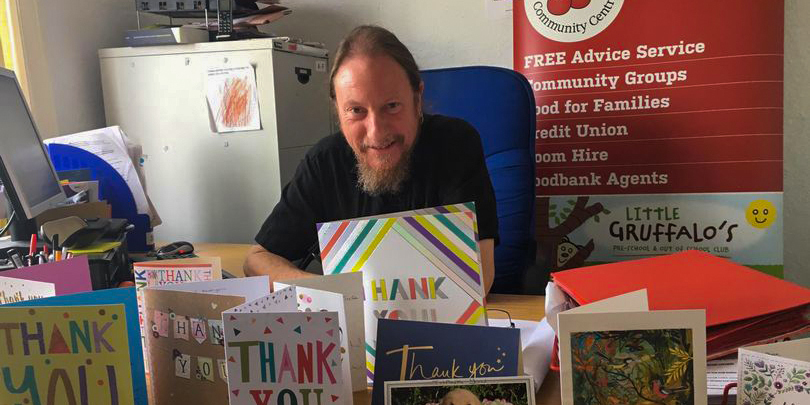 Are you aware of your rights and entitlements?

When you walk into Steven Swales’ office at the Beverley Cherry Tree Community Centre, the first thing you notice is the sea of thank you cards on his desk.
They are a fraction of the hundreds of grateful notes he has received over the years from people he has helped.
Steven is the senior advisor at the centre’s Advice Service, in charge of a team of volunteers, most of whom have retired, and who are using their knowledge and experience to help others.
The Centre provides a free confidential advice service to the people of Beverley and East Yorkshire, making sure they are aware of their rights and entitlements. They focus in particular on debt and bankruptcy, and also help with employment issues.
They pride themselves on the motto: “When you don’t know where to turn we can help you or find someone who can!”
The cards are a reminder for Steven, 58, of the importance of the Centre’s work. He says: “Unfortunately, by the time many people come and see me, they are at the end of their tether and don’t know what to do or where to turn.
“They come here, and they are often in tears. I do my best to help them. If that means filling a form, I’ll do it, but I will take an issue as far as tribunal if necessary.”
Some people have heard about the centre through word of mouth, and others are referred by various agencies such as Citizen’s Advice or the Jobcentre, or their GP.
They may be struggling after losing a job, or through a change in circumstances such as illness, bereavement, or a relationship ending.
Steven says: “The issues are particularly difficult in this area. And it doesn’t take much to push people over the edge. It takes just one hiccup, and suddenly you have lost your job, your income and can’t pay your rent.”
Steven specialises in welfare rights so gives advice on disability benefits, Employment Support Allowance, Income Support, Pension Credit, Attendance Allowance, redundancy pay and maternity benefits. For many it’s a minefield that without Steven’s guiding hand they would find impossible to navigate.
“I had a chap in his 30s in recently who had MS, and had to leave work. He was refused disability benefit, so I wrote a letter for him. He was turned down again. I took it to tribunal and eventually won. It was ridiculous, as he should have just had received the benefit in the first place.”
The Beverley Cherry Tree Community Centre has always been a base for local residents and pensioners, and also has a Women’s Group and a Credit Union.
But the impact of the Advice Centre is perhaps the most tangible, as evidenced by the stack of thank you cards.
Steven adds: “When we get a plan in place people tend to feel so relieved, like a huge burden has been lifted from them.”
Share this post: